Why I’m glad I gained 20 pounds, but dropped a pant size in 2014 via CrossFit 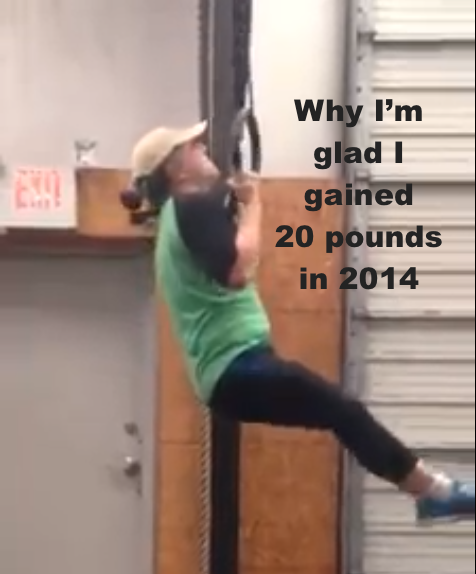 I gained 20 pounds in 2014 but dropped a pant size. Thanks to Sharonda M. for the photo of my strict ring pull-ups.

Weight has always been an issue for me.  In high school I was thin, then chubby, then what the charts would register as overweight. Don’t even get me started on college. Instead of the freshman 15, it was more like the freshman 50. I would stop by Burger King with friends after class, every day.

Packing away fried chicken sandwiches, fries and a drink was a skill I honed every time I got a chance.  (Gross right?)

Pregnancy, a job where sitting on my duff all day actually made my duff spread (because of the weight gain) and inactivity led to some pretty high numbers on the scale.  I dropped all of that in 2012/2013.  That was the year I dropped 110 pounds, finally getting back down to 145 pounds. Something I was proud of and relished my size 10 pants.

Stop saying ‘I want to be toned’

If you ask my coach what my reason for starting CrossFit was, he probably won’t remember the exact words but he could probably say ‘She said something about getting toned.’ He would be right.  That’s what I said but I was ill informed.

Toned really isn’t the goal with CrossFit – it’s strength.  I want to be strong.

So over the past 10 months of CrossFit I’ve dropped the ‘toned’ goal and set new goals of lifting heavy and building strength.

Losing body fat and building muscle is a long process.  Building upper body strength is a long process.  I’ve never been able to do pull-ups but in August I started doing pull-ups, unassisted. (Unassisted means, no giant rubber bands helping me get my chin above the bar.) Now I can do 10 pull-ups without stopping, on a good day.

In October I benched pressed 140 pounds.  That’s basically what I weighed on my wedding day 11 years ago.

Here are a few of my other stats:

Deadlift: 5 rep max (meaning I can pick it up 5 times without stopping): 205 pounds

Looking back over the past 38 years of my life, I can honestly say I’ve never been this strong. Ever. However, there’s still a lot of room for improvement.

If you chat with the March 2014 Christie about weight, she would say something about I hope to lose more weight and get in shape.  Chat with me today and I’ll tell you something completely different.

The number on the scale doesn’t matter to me anymore and here’s why: I’ve dropped a pant size, size 10 to a size 8 (it would be two in the waist but my thighs and calves are too big to wear a smaller size).  Despite the number deficit on pants the numbers have increased when I step on the scale.  I’m now 165 pounds.

I put on 20 pounds in muscle mass and I couldn’t be happier.

Now don’t freak out and think I look like He-Man.  I don’t.  I still have flabby areas but my teacher arm is gone (and that was a a goal). 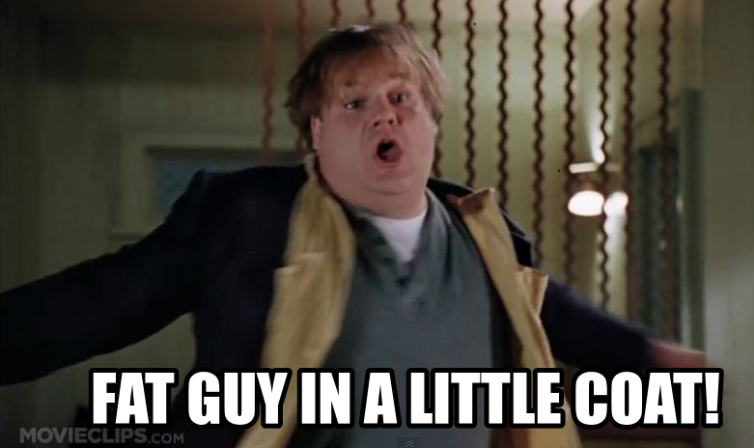 Who knew weight lifting could be life changing?

“You’ll bulk up or look like a man” is often the first thing someone will say to you if you mention CrossFit or weightlifting and you’re a female.  But they’re wrong.  Building muscle mass via lifting weights is one of the best things women can do to build bone density and prep for older age.  I’m not a doctor and don’t pretend to be an official but countless studies support weight use in exercise for women.

Women need to embrace this and just get over the fear of lifting and the fear of rejection from their non-lifting friends.

Your mileage may vary

It’s obvious that everyone is different.  You know that.  You also know what your personal goals are, what your budget is, what your schedule offers but there’s one thing you may not know – That’s what your body can do.

Right now you may be thinking, there’s no way I could ever do a pull-up. Right now I’m thinking I’ll never be able to do a handstand push-up because I have a fear of being upside down and snapping my neck.

What do you say we stop thinking that we can’t do something and at least try?

Who knows you might be high-fiving yourself at the end of 2015 for gaining weight or better yet, gaining strength.